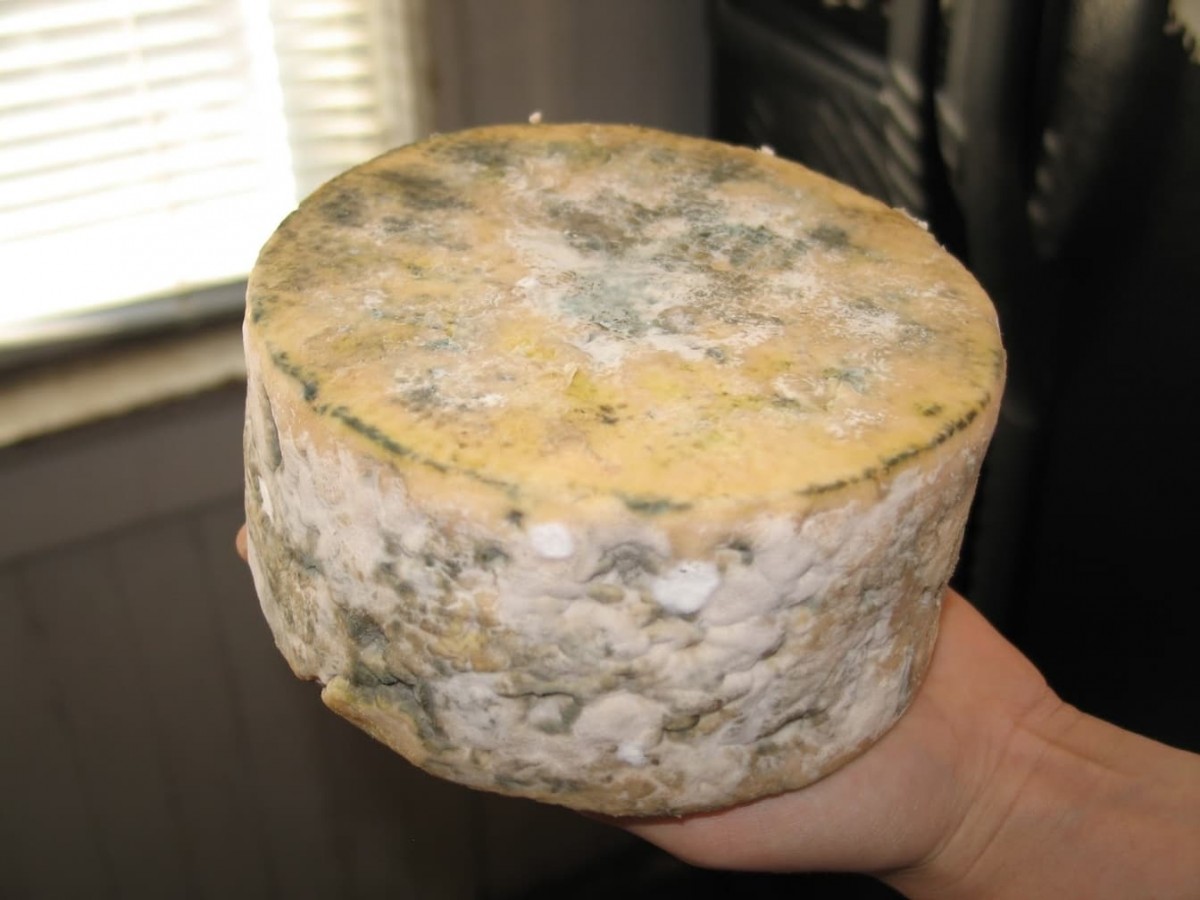 Gorgonzola is a POD product (Protected Designation of Origin) under EU law, which means it can only be produced in the northern Italian regions of Piedmont and Lombardy. Gorgonzola is one of the blue cheese with the signature blue veining, thanks to the mold Penicillium glaucum. That brings us a good question, is gorgonzola supposed to be moldy?

Yes, gorgonzola is a mold-infested product, just like other blue cheese. During the aging process (usually 2-3 months), you will usually be able to see various type of good mold/bacteria growing on the rind of gorgonzola. The operators will remove the mold on the surface before packing.

I know, it’s not that kind of appetizing cheesemaking you would expect. However, it is safe to be consumed by which the cheesemaking has to be operated under the stringent sanitary rules.

Normally, gorgonzola lasts for 2-3 weeks if refrigerated well under 37° F. Once opened, the shelf-life reduced to 1 week or less. As the contamination may happen after exposure, you should finish the cheese within 3-5 days. If your gorgonzola has gone past the expiry date, you should discard the cheese. Never try to eat it.

How do i know if gone bad?

The well-ripened gorgonzola should have a delicious taste of sweetness, strong and sharp aroma, mild, creamy, salty, decent nutty, buttery, and a slight of crumbly.

The gorgonzola which gone bad has a few characteristics:

Why does gorgonzola cheese stink?

The nature of gorgonzola comes with a bit sourness, or stinky smell, some say. It because of the mold and bacteria present naturally in the cheesemaking process, and also in the cow’s milk. As we discussed earlier, some of these mold/bacteria responsible for the unique taste. And awkwardly, similar bacteria can also be found in our feet or private area. Thus the smell.

So, the mold gorgonzola still safe to eat?

So, let’s say your gorgonzola has accidentally stored for a while now, and you find some mold growing on it. The logic for semi-soft cheese is to always throw them away instead of eating. It’s highly possible that the microbe is already gone for the whole cheese unnoticeably.

Unlike hard cheese, gorgonzola is not supposed to “cut off at least 1 inch below” as suggested by some people. Once you find them contaminated (not the kind of look you have them earlier), we can’t really tell if it was good or bad germs in there, so you should just discard the whole wedge of cheese instead of risking to get food poisoning.

Remember, the cheesemaking is operated under a controlled environment. So, the mold is selectively added for the purpose. Improperly storing will also increase the histamine level, learn more.

For instance, you may accidentally touch the stored cheese, cut with uncleaned knife, or frequent open/close the fridge which causes fluctuation in temperature. There are many other factors can make the cheese go bad.

For the same reason above, by right, you should not eat them if the expiry date has passed. Since gorgonzola can’t be brined like mozzarella or feta, it’s not for longevity and doesn’t naturally last long.

More sensibly, if you would still like to use them after the date, you should do a quick check on the appearance to look for any visible mold. If yes, discard the cheese. Otherwise, use them in only for dishes with high-heat cooking, such as soup.

People are also suggesting to freeze the cheese in the freezer. It will work ideally, but freezing and thawing process will inevitably destroy some of the good protein & nutrient structure, as well as compromising the excellent taste of gorgonzola. Once thawed, there is also an increase of moisture as well, finish them in 2-3 days or asap.

Never freeze your cheese unless you have no better option.

How to store your gorgonzola properly?

If you have too much gorgonzola and would like to store some for later, here is what you should do. Use a clean knife and make sure that your hands are sanitized before handling. Salt the surface of gorgonzola with a pinch of kosher salt. Wrap the cheese with a plastic wrap, parchment paper, wax paper or baking paper. Then, keep it in an airtight container and seal. If done properly, the cheese should be able to store a couple of weeks or longer.

Meanwhile, try not to add more or cut a small piece of cheese then place back, finish the cheese in one shot to minimize the contamination.

Less often, but some traditional gorgonzola may be made of unpasteurized cow milk — And it will go bad much quicker. As a general rule of thumb, moldy cheese means not safe to eat. In no circumstances that the gorgonzola you brought home, which later grew mold on it (even refrigerated), is still safe for your family to eat.

link to Provolone vs Asiago Cheese

Throughout the hundreds of years, Italy has built up a rich cheesemaking custom. Therefore, there are a lot of kinds of Italian cheddar. Albeit every Italian cheddar is one of a kind because of the...

Provolone and Gouda are both popular varieties of semi-hard cheese. They can both be melted, eaten alone or cooked with. They’re both made from cow’s milk. So, what’s the difference?...

Hi, I'm Aaron, the writer behind DarkCheese. From mozzarella to parmesan, my family and I started this site for the purest love of cheese. There is no way I can live without cheese XD.

Feel free to reach out to me! I will be glad to help.